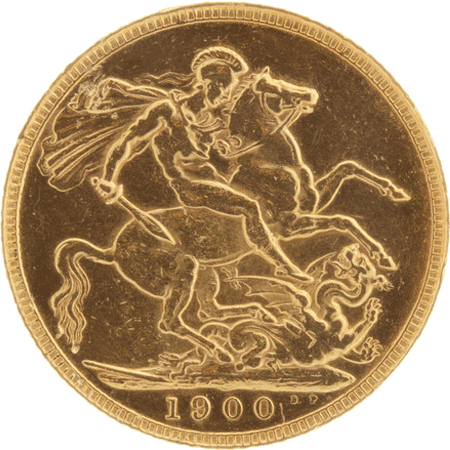 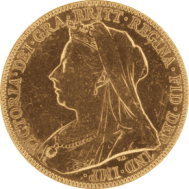 Gold sovereigns have been produced since 1817. The gold content was fixed by the coin act of 1816 at 7.32g unchanged to date. They are 24 carat gold.

The Gold Sovereign Coin is one of the world’s most recognizable small gold bullion coins. Minted in large quantities in the United Kingdom by the Royal Mint and other mints worldwide this coin has iconic standing.

Most of the 19th century saw Queen Victoria’s image on the sovereign. In the 20th century British Gold Sovereigns have carried the image of Edward VI (1901 – 1910) and George V (1910 – 1936) and subsequently Queen Elizabeth. The front of Edward George and Elizabeth sovereigns have the appropriate monarch’s picture and the reverse of these historic gold coins illustrate Saint George slaying the dragon along with the coin’s date.

Sovereign Gold Coin – The obverse of the British Sovereign coin portrays the reigning monarch (sovereign, hence the name) of the United Kingdom. The die cast is changed in-sync as the British monarchy changes.

Sovereign Gold Coin – The coin portrays Pistrucci St George, slaying the dragon. Saint George is the patron Saint of England and his slaying of the dragon is a thing of legend. The obverse also features the date of the gold bullion coin.