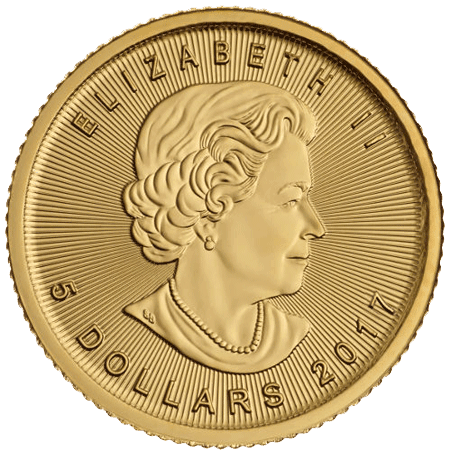 As gold bullion coins go, Canadian Maples are among the most desirable on the market. They are guaranteed by the Government of Canada and have been traded on the world markets since 1979. It is so desired because it contains no base metals at all only gold from mines in Canada. It is considered the purest gold bullion coin in the world. Since its release in 1979, the 1/10 oz Gold Maple Leaf has appealed to both investors and collectors alike for its beauty and purity.

On the reverse of the 2017 1/10 oz Canadian Gold Maple Leaf Coin you’ll find the iconic sugar maple leaf design in the center. Engravings surrounding the maple leaf include the nation of issue, purity, metal content, and weight of the coin.

There are no reviews yet.

Only logged in customers who have purchased this product may leave a review.